IN life, a project can start with a simple email or a phone call. From a simple suggestion to taste a chocolate pudding, who would have ever imagined that, a few weeks later, the tasting would have turned into the crazy idea of organising a review of brownies from different brands and bloggers willing to take part in the project.

Beyond the tasting and reviewing (which is far from being the hardest task to accomplish, I must admit!), I discovered people with a true love for brownies. A passion so intense that they can spend hours talking about these wonderfully intricate small squares of chocolate. Small, but so much to say!

“A brownie should be chewy on the outside – a kind of baked fudgy casing – with an almost glossy, meringue-like, light crunch to the top. Biting in breaks through the top easily, straight to the deep cakieness – and on to the soul of the piece: the dark, fudgy centre.” Petra, ChocStar

“A chocolate brownie is ‘a rich dense chocolate cake slice’. It should be moist, dense and fudgy with a paper thin crisp top.” Sarah, Serious Treat

“My perfect idyllic chocolate brownie is rich, chocolaty, fudgy and gooey with chocolate pieces in it and ideally a slight crust on top. Ingredients must be natural and good quality including chocolate such as Belgian. Nuts are wrong and detract from the overall chocolate taste in my opinion. A brownie should be a pure indulgent treat, totally different to a slice of cake.” Natalie, Sweet Things

A brownie may cheer you up in the middle of the afternoon, an enjoyable moment of pleasure. Brownie makers, however, take the definition of a perfect brownie very seriously and spend hours creating the ultimate recipe. From the varying – and often contradictory – definitions they come up with, I’m sure they’d send just as much time arguing the said definition.

“The absolute perfect brownie is simple and pure – it doesn’t contain booze, nuts, raisins or cherries. It is simply 70% chocolate, eggs, flour, butter, sugar and vanilla. It should be something you can also pick up with your hands and take an almighty bite out of, getting your hands and face a bit sticky as the intense chocolaty-ness hits you. Most importantly, a brownie is the perfect brownie if when you’ve just finished it, you’ll wish for just one more bite.” James, SoBo Chocolate

“A brownie is a small, chewy, cake-like cookie, usually made with chocolate and possibly containing nuts or dried fruit which brings huge joy to children, many adults and to the cook who made them. The best brownies always look home-made – if they’re too perfect they probably don’t taste too good!” Paul, Paul’s cooking

“A brownie should be soft and slightly gooey in the centre but not undercooked with chunks of chocolate and pecan nut, strong chocolate taste with no artificial taste nor powder taste. We find that enrobing the brownie chunks increases the chocolate taste and make a nice contrast from crisp coating to soft interior.” Anne, Artisan du Chocolat

So, with pen, paper, water, a bottle of 2004 Domaine Pouderoux, Maury and 1988 Vin Santo Castelio di Verrazzano ready, Aforkfull, R_McCormack, Bridedwithfood, chocolatetour and my dearest D were ready to dig in and enlighten ourselves in the mystery of brownies.

What started as a simple tasting, though, turned out to be a very instructive master class. What I thought was an insignificant piece of chocolate cake had actually much more to say in its defence than I could have imagined, especially with the incredible range we had at hand – Bea’s of Bloomsbury, Paul A Young, SoBo Chocolate, Leon, Gu, ChocStar, Paul’s cooking, Garlic Confit, Serious Treat, Gower Cottage, Sweet Things, Cocomaya, More Artisan, William Curley, Artisan du Chocolat, Cocoa Loco and Wholefoods.

Learning #1: This ‘interesting beast somewhere between a cake, pudding, chocolate bar and a ….well cake again’, as Garlic Confit defines it, likes to differentiate itself. The most creative ones will play the fudgy and gooey game while the others will concentrate on the right balance between the crispiness and the chewiness. The brownie lives and likes to be eaten for itself and, among the 19 brownies tasted, none of them looked or tasted the same. Team spirit is definitely not a notion that a brownie will fight for.

“Traditionally Brownies are made in a bar or square mould and cut. They are often soft in the centre giving a gooey texture. We serve ours in a small cup to give the appearance that it has been made just for you. Our Brownies have a soft centre with roasted walnuts and a crusty top adding texture to the Brownie.” William, William Curley

Learning #2: Being creative is good…but not too much! Playing with flavours and texture adds a nice touch to the brownie world, it brings something different and unexpected but sometimes the classic remains the best.

“A brownie should have a little crunch on the outside and be deliciously moist on the inside as well as having a luxurious chocolate taste that coats the inside of your mouth as you munch, with an intense chocolaty velvetiness that continues to excite the taste buds as you eat.” Kate, Gower Cottage

Learning #3: The choice of the ingredients and especially the quality of chocolate will make the success of the brownie. Use bad chocolate at your own risk! It usually results in a buttery, sugary cake that our poor palates have trouble enjoying for more than a bite.

“A brownie is chocolate that can be consumed with a dense but velvety finish in the mouth.  A brownie should not in any way, shape or form, resemble cake. Brownies are one of the few desserts by which the quality of the chocolate is most seen, particularly ours as chocolate is the number one ingredient by weight in our brownies.” Bea, Bea’s of Bloomsbury 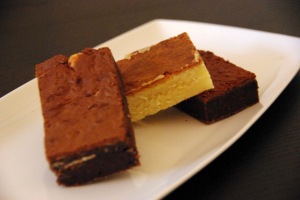 Learning #4: Judging isn’t an easy task. Expectations are high and you don’t want to disappoint anybody. Beyond that, each brownie was not made with the same audience in mind, nor were they made for the same purpose.  Some are meant to bring us back to childhood, while others are epitome of chocolate perfection. But you have to make a choice and taking a decision – even if the fear of being blacklisted by everybody – suddenly crosses your mind (eek!).

Learning #5: Water is your best friend! Drink a lot of water when you organise a brownie tasting… and stay away from chocolate for the next couple of days.

After having enjoyed a few bites of each brownie, debating the taste and the texture, discussing the look, figuring out the quality of the chocolate and the necessity of adding flavours, rinsing your palates from sugar and duelling with the imminent stomach ache, it was time to compare notes and determine favourite choices.

But how to feature it? A lot of questions came up to find a way to present our feedback.

Should we give a prize to everybody? I don’t think so as the list was very long.

Should I mention what we liked and what we disliked? I guess it could be a good learning.

Should I list the brownie based on our rates? It wouldn’t be fair as some were made by professional chocolatiers and others by bloggers.

We finally decided to announce our 5 favourites and explain our choice based on everybody’s feedback.

William Curley. A crunchy and gooey texture all at once with a light nutty taste obviously made with very good quality chocolate that created a perfect balance. Funnily enough, the brownie looks more like a muffin but the taste is definitely what you expect from a brownie.

Cocoa Loco. A denser brownie with a texture made of different layers that gives a nice crispiness in the mouth but still keeps its gooeyness. The chocolate is very tasty but not overpoweringly so with a light sugary taste. 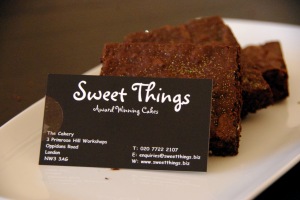 Sweet things. A nice full chocolate taste that stays in the mouth providing a comforting feeling. The brownie is nicely dense and fudgy without being too gooey. The glitter sparkles on the top adds a nice touch!

ChocStar. The perfect texture, both crunchy at the top and fudgy inside.  The brownie has a very nice smooth chocolate taste in mouth without being too sugary.

Cocomaya. Despite being a bit heavy without any true crispiness, the texture feels very good.  The chocolate is rich and intense with an interesting hint of sea salt.

SoBo. The Nut-lovers’ choice, the fudgy brownie started with a nutty taste which it held throughout.

I would like to give a special mention to Bea’s of Bloomsbury white chocolate brownies. The texture reminds more of a flan but it has a very pleasant and smooth taste.

For someone passionate about food, it was a unique opportunity to have the chance to taste all these brownies at once and I would like to thank all the chocolatiers as well as the bloggers Paul’s cooking & Garlic Confit who were willing to take part in this truly interesting and rich experience. Merci !

Error: Twitter did not respond. Please wait a few minutes and refresh this page.